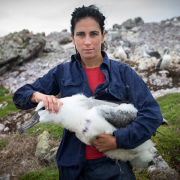 Dr Alderman is an inspiring scientist who clearly loves what she does – managing the Shy albatross monitoring and research program and raising awareness of Tasmania’s own magnificent bird of the seas.

With wings stretching up to 2 ½ metres, most of the Shy albatross' life is spent at sea, only setting down on three Tasmanian islands –  Pedra Blanca, Mewstone Island and the aptly named Albatross Island* – to breed.  As is sadly often the case with our wildlife, Europeans came close to wiping out the albatross for its eggs and feathers. Thankfully some remained and the population began to recover but now it's again under threat.

1. Why the Shy albatross?

It's an amazing bird, endemic to Tasmania and it really is our own special albatross but most people don't know about it or its vulnerability.  It is long-lived, monogamous and truly spectacular to watch in the air.

Research brought me to Macquarie Island in 2000 and I later moved to Tassie to take over responsibility for the albatross program. I've never left – the access to wildlife in its natural habitat is simply amazing here and whilst there are many eco-systems in the world that need our help, this is the one I’m focusing on. 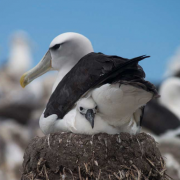 2. Why are they threatened?

The first main threat emerged as accidental drowning associated with fishing. The albatross are attracted to boats as a source of food and will go after bait or the catch, get caught and drown. It remains a major issue.

The biggest threat now is climate change.  Already there are changes in the foraging environment whilst on land it's getting hotter and drier but with rain events that are bigger and heavier. By their very nature, the albatross find it hard to adapt.

Some species move on if their breeding environment changes but the albatross has an innate need to return to its colony of birth. Given these birds live for decades (some in the monitoring program are known to be 40 years old) and lay one egg per season, they simply can't evolve as quickly as other species.

Other threats include marine pollution – the plastics in the ocean and going through the food chain – and of course, the fact that we are increasingly taking their food supply.  Conservation resources are also hard to find and add to the future problems of any threatened species. 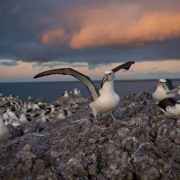 3. What's the most important aspect of your work?

There are actually three equally critical parts of our Shy albatross program:

All these things plus the commitment of researchers are crucial to this species. 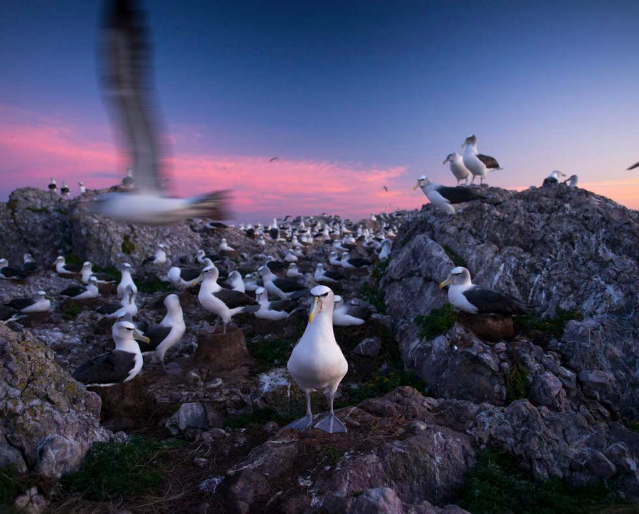 4. When will you know if the new artificial nests have worked?

We can't change climate change overnight so we're working on ways to increase the resilience of the Shy albatross. One of those is testing some artificial nests.

These birds form long term pair bonds through courtship rituals, building their nests together and sharing the duties of incubating and feeding the chicks. They return to the same nest site every year and given the islands they nest on, reasonable nesting material isn't always abundant.

We know a good a good quality nest, high enough off the ground with a nice nest bowl, is more likely to result in chick survival.   Last season we put in a few as proof of concept – they worked so more were added this year.  We're heading over now to see how many have hatched and compare with the real nests.  The final result won't be known until April when we go back at the end of the season as the chicks are ready to fledge.

The big question is how good will they be? Will it be a small benefit or large? Could it be powerful way to increase resilience in the face of climate changes? We certainly hope so.

5. While you're getting up close and personal with the Shy albatross, can the rest of us help?

Please, don't feel like any of these issues are too big for an individual to make a difference.  There are things we can each do that can bring about change if enough of us help out.

The artificial nest trial demonstrates that we can we can be a creative, resourceful and dedicated bunch of people and that it is possible to make a difference - whether we’re talking about the Shy albatross or the bigger picture.

* Please note that access to Albatross Island is strictly restricted by Parks & Wildlife and a permit is required.

And the artificial nests: