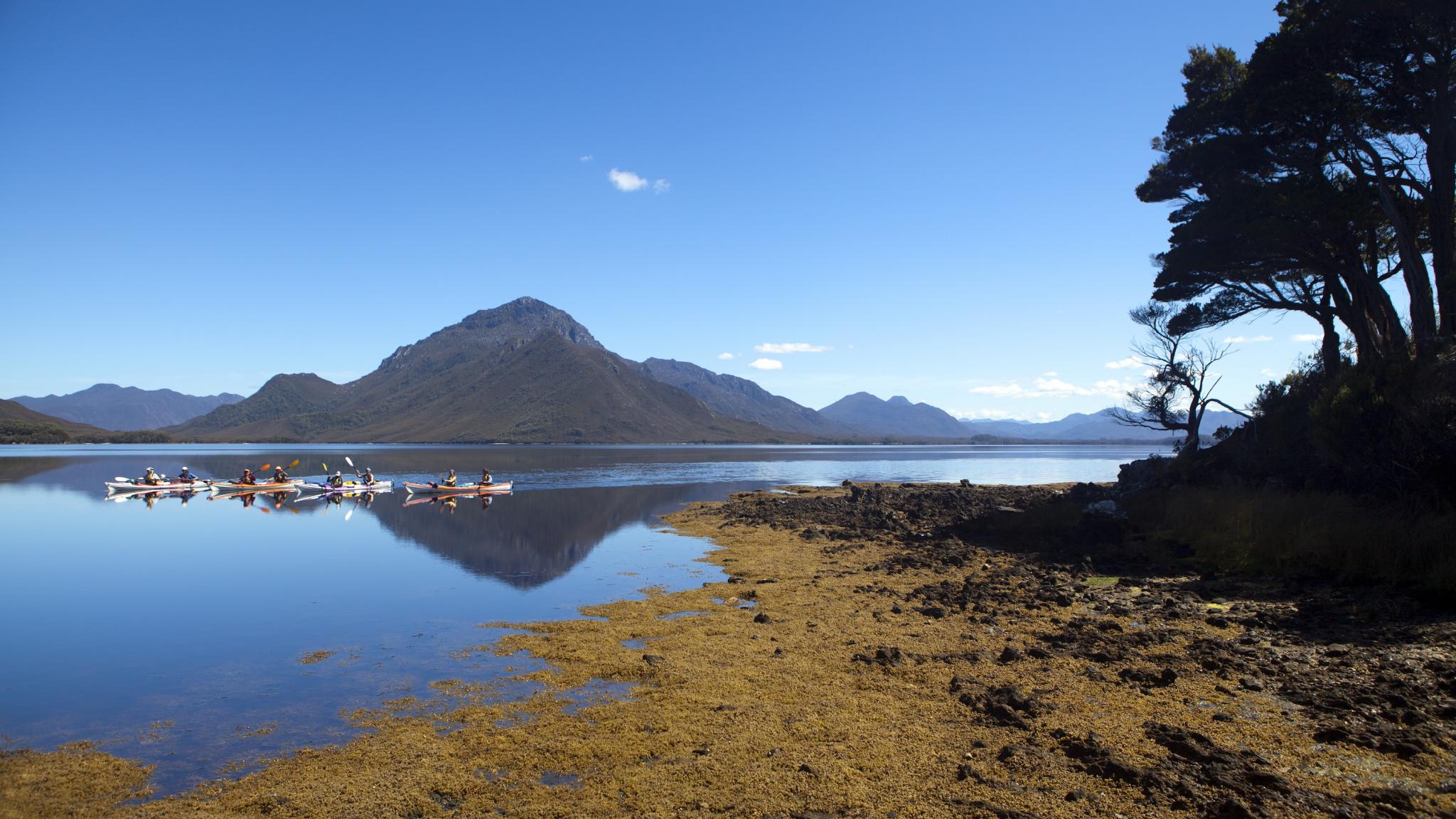 It’s hard to believe the UNESCO World Heritage Wilderness Region of Bathurst Harbour was once a large, dry plain. Rising sea levels some 7,000 years ago flooded the entire area creating what is now referred to as ‘the most magnificent paddling destination in Australia’ and offering ‘one of the world’s 10 epic sea kayak paddles’.

Three times the size of Sydney Harbour, Bathurst Harbour is protected from the Southern Ocean by the narrow Bathurst Channel, creating on still days a mirrored water surface that perfectly reflects the blue sky and surrounding mountains. Kayaking over these mirrored images can feel like entering another dimension - a meditation disturbed only by the splash and movement of paddles.

Often mistaken for patches of snow on the surrounding mountains and cliffs are the local rocks of quartzite and schist.  The peat soils surrounding Bathurst Harbour are also typical of Tasmania’s south-west region, as are the heathlands, buttongrass moorlands, and shorelines of tea-tree, banksia and eucalypts.

Numerous rivers run into the harbour, encouraging extensive areas of ‘blanket bog’ (vegetation communities characteristic of southwest Tasmania). Water running through buttongrass peatlands leaches the tannins from plants and colouring the creeks and rivers a deep amber. Nearer the sea, the waters of Bathurst Harbour become salty (brackish) and dark, creating a biological curiosity where species of marine animals and plants usually found in deep water are able to live close to the surface (another fascinating area of interest and perhaps a blog for another day). 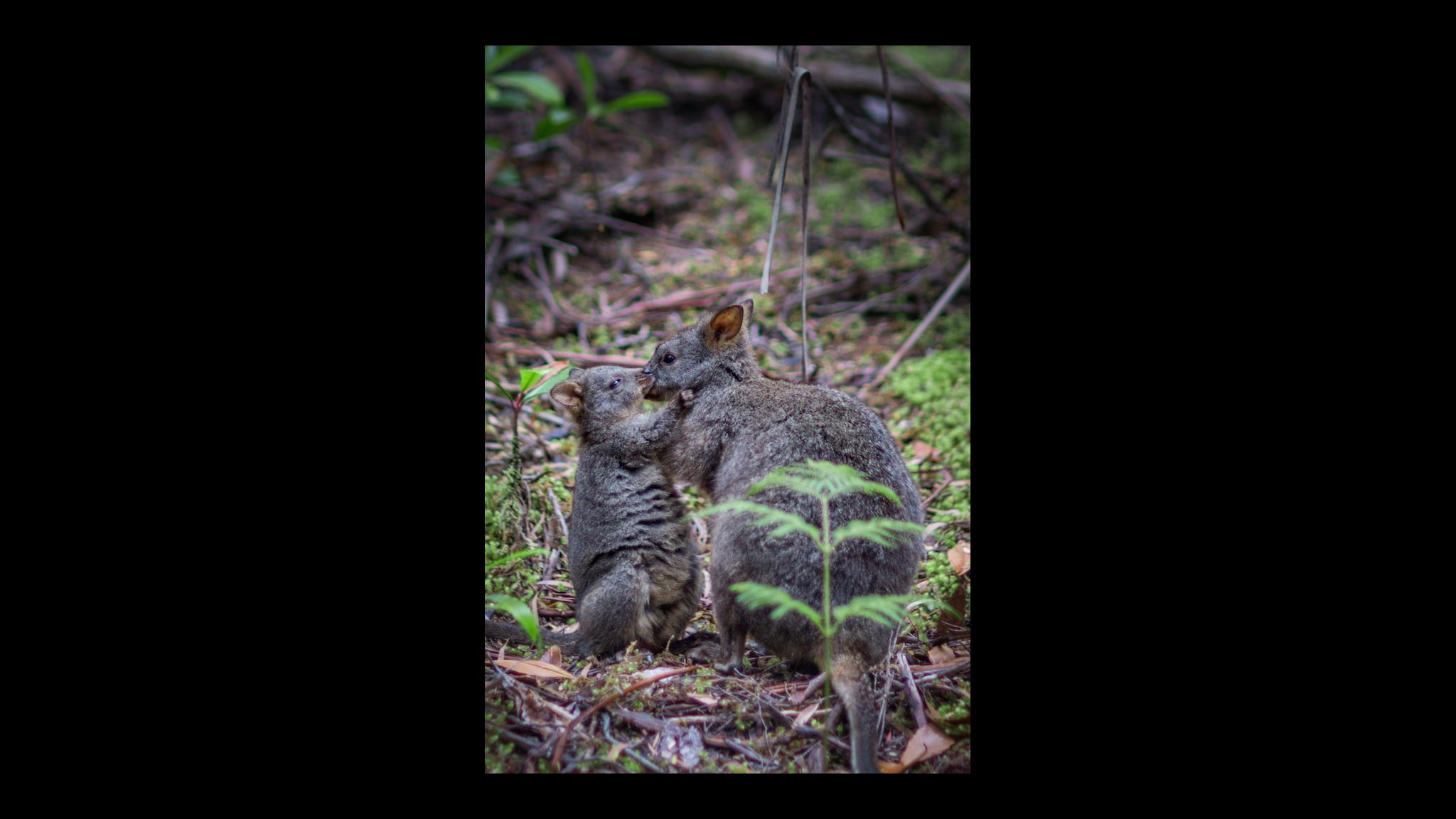 Marsupial lawns nestle in sheltered locations created from constant grazing by wombats and wallabies, and it is magical to see a wombat at the water’s edge as we paddle past. The entire region abounds in wildlife with a variety of small nocturnal marsupials, burrowing crayfish and a colourful chorus of birds, insects and frogs.

The waterways of Port Davey and Bathurst Harbour lie at a latitude of 43 degrees south, in the direct path of wind referred to by sailors as the Roaring 40s. These prevailing westerlies sweep around the globe at high southern latitudes almost unhindered by land and brush Tasmania, the South Island of New Zealand and the tip of South America. The air you breathe down here last blew over land on the coast of Chile, 8,000 kilometres to the west. 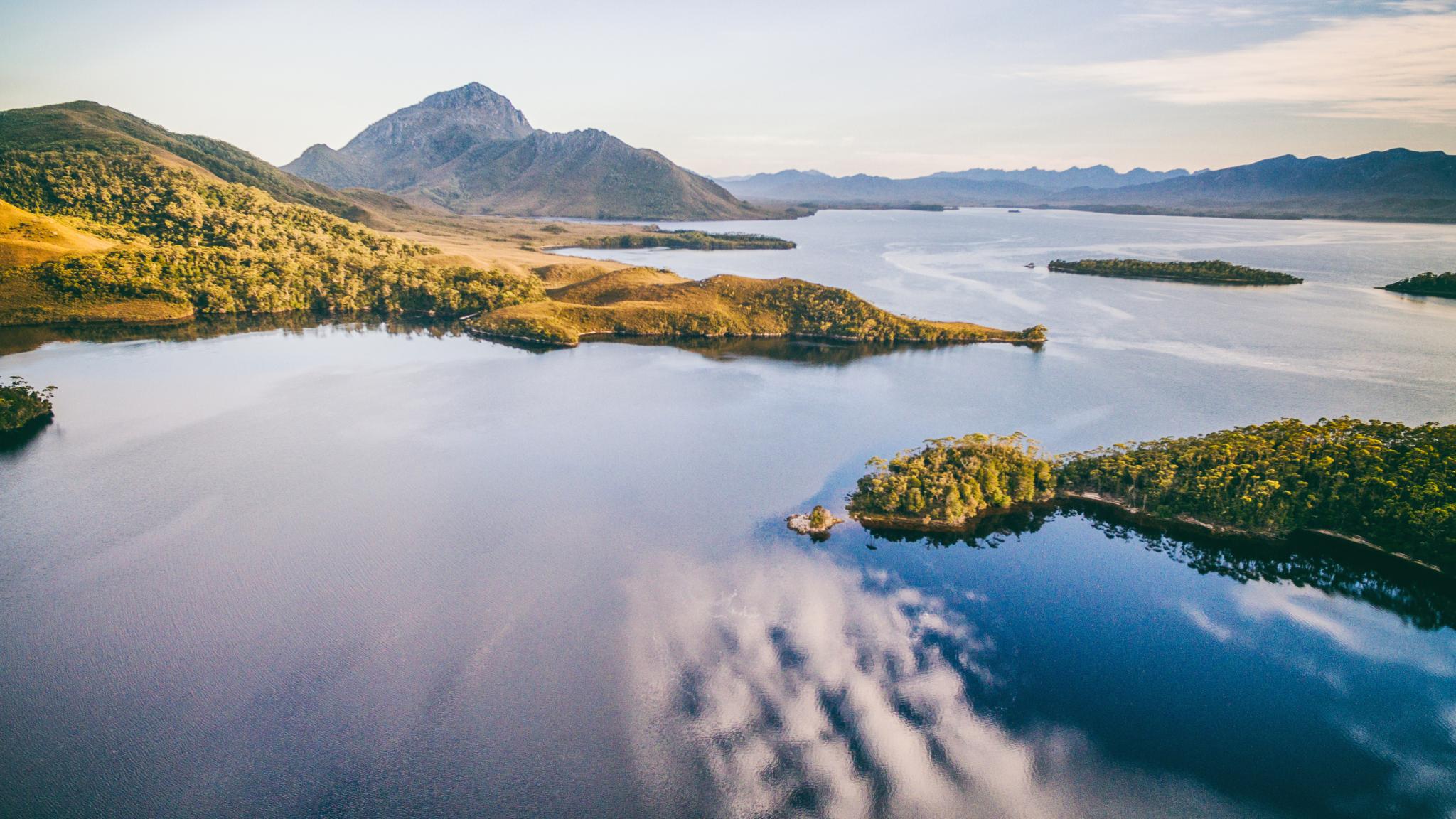 Part of the appeal of this region as a kayaking destination is its complex geographical landscape. With a profusion of inlets, points, islands, beaches and bays there is always somewhere sheltered from the breeze and comfortable to camp.

Few people have the opportunity to experience such remote wilderness regions. Exploration by sea kayak is the most authentic and adventurous way to immerse yourself in the awe-inspiring natural beauty of Bathurst Harbour in southwest Tasmania. 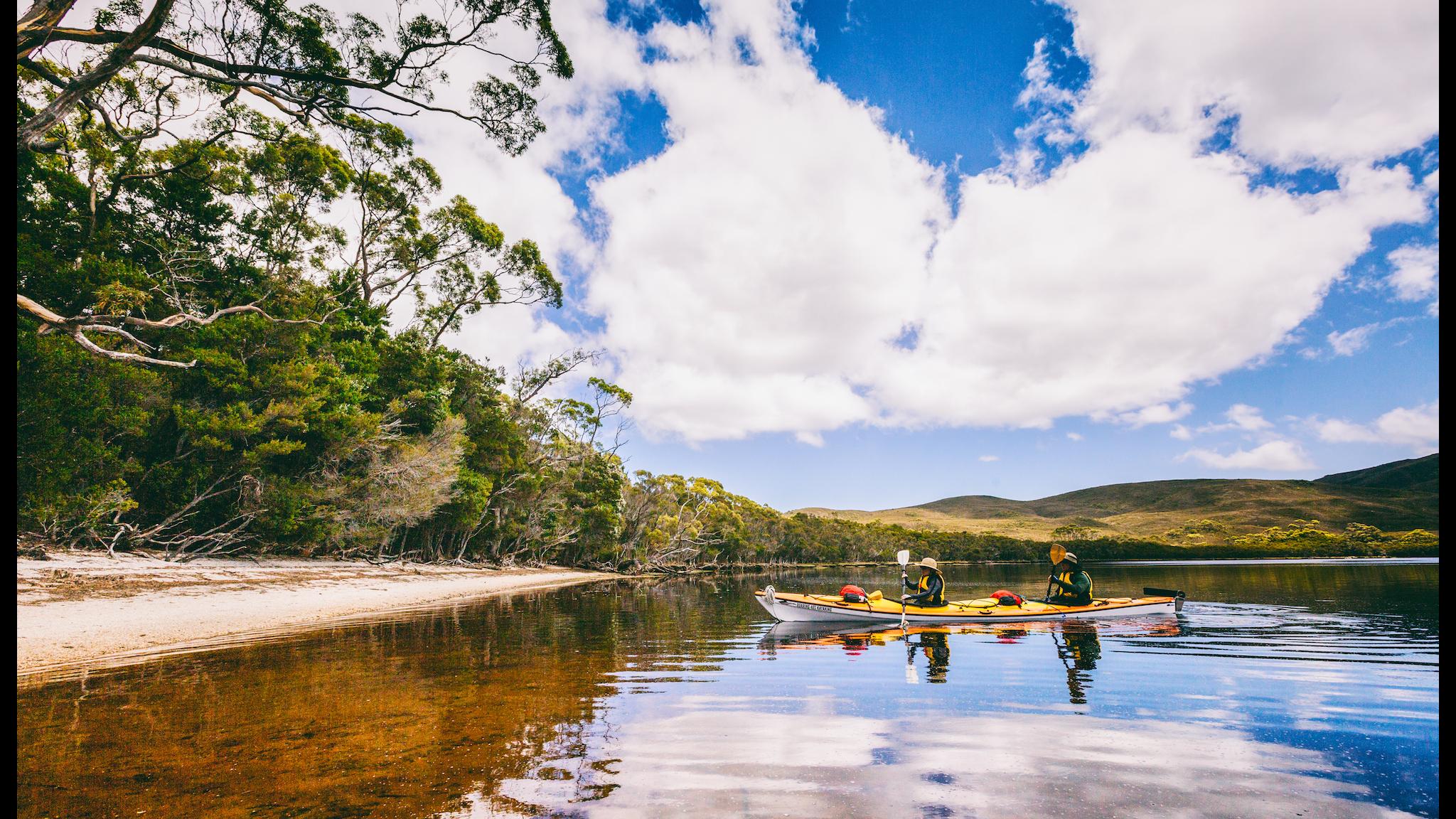 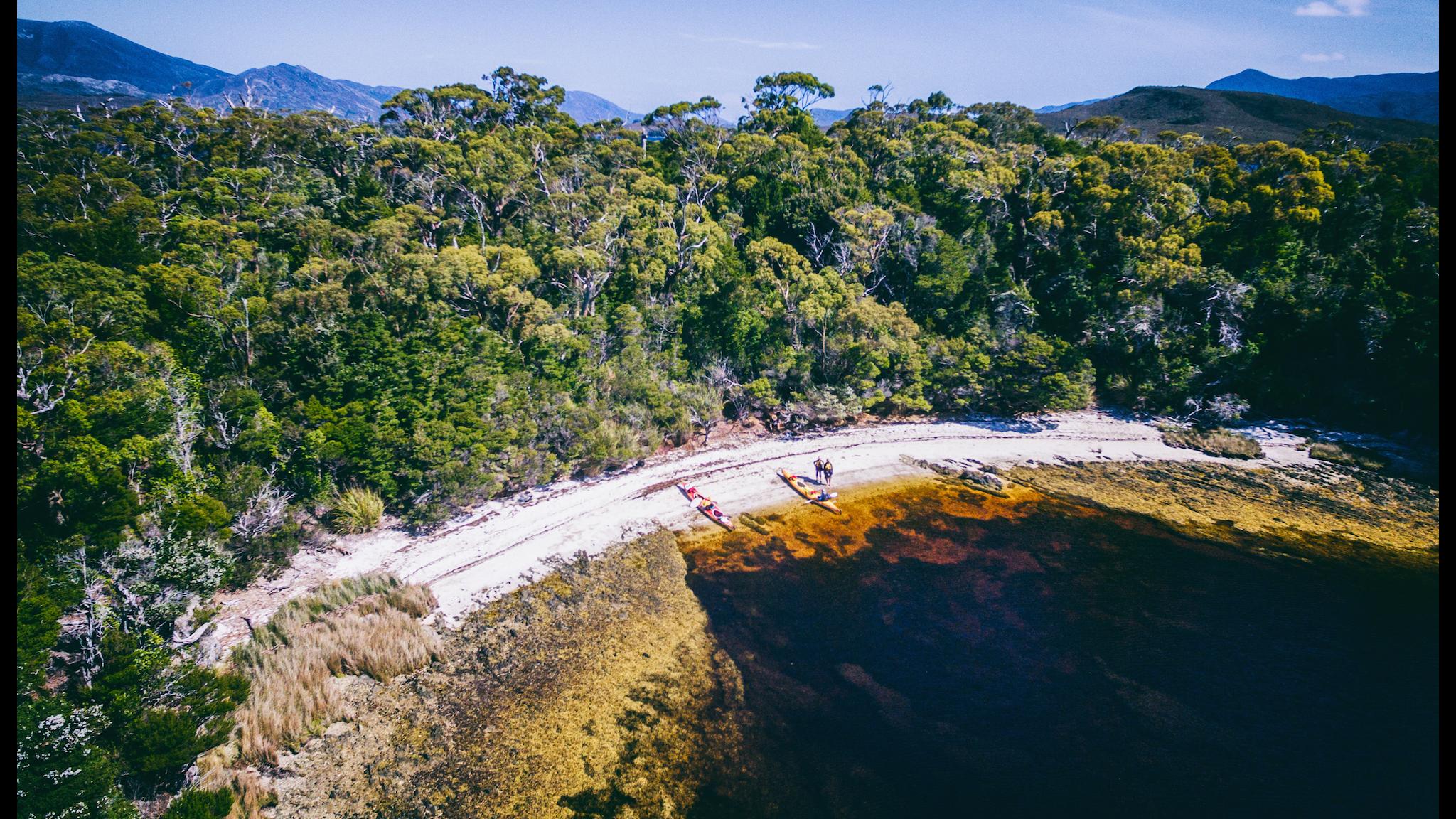